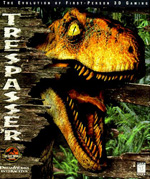 Synopsis:
Jurassic Park: Trespasser (also known as Trespasser) is a video game, which was released in 1998 for Microsoft Windows after much hype and anticipation. The player assumes the role of Anne, the sole survivor of a plane crash on InGen’s “Site B” one year after the events of The Lost World: Jurassic Park. With a fractured arm and only her wits, Anne must escape the remote island by solving puzzles and evading dangerous dinosaurs. Trespasser’s game engine was advanced for its time and required a fast computer to adequately display the game’s detailed graphics without pixellation artifacts. The game disappointed many reviewers and is often mocked, but has a cult following and a strong modification community to this day.

Back of Box Description:
“You don’t belong here. This isn’t your world. It belongs to ancient 5-ton predators that move silently through lush jungle, an elder race who ruled this world long before your race came about. That’s not fantasy, it’s hard science. And it belongs to the enigmatic man whose iron will brought it into being – your adversary, your companion, your ultimate destination. Trespasser is the next generation in adventure. This is not what you have seen before. Simply put: the Trespasser team has always had fantasies of what an adventure should be like, and we have done our best to create that game. This is a complex world of real time and real physics. No dreary, repetitive combats. No standard puzzles. In a simulation where every object and creature is a physically modeled entity, you will learn to survive by improvisation, daring, and sheer will. Inside your computer you will scale towering cliffs and plunge into the darkest jungles. You will penetrate silent, hidden groves, and explore vistas of stunning beauty. You will reach a forbidden place, the origin of the greatest mystery in the modern world. Consider yourself warned…”

PC Cheats:
To activate cheats, unlock command-line window by pressing [Alt] + [F11]. Then enter one of the codes below.

Special thanks to TresCom, they really keep this game alive, you should really check out their mods and so on, you should at least visit the site. Great work, TresCom!