This scene follows up the beginning incident scene instead of the transition to Ian Malcolm on the Subway being recognized on his way to see Hammond. Ludlow in this scene briefly describes money owed for death settlements of characters from the first film except Dennis Nedry. Ray Arnold (said in the scene as John Arnold, which goes back to the character name from the first novel), Robert Muldoon, and Donald Gennaro are all named. Also mentioned is the “deconstruction of facilities on Isla Nublar organic and inorganic” which alludes to the fate of Isla Nublar at the end of the first film. The idea behind this scene is that Ludlow uses the troubled financial state of InGen to remove his uncle, John Hammond, from CEO of InGen while establishing why the second film takes place on an entirely new island from the first film.

Extended Hammond and Malcolm
Not only was this scene intended to be longer in the script, but it was also to have a different opening of what was in the film and offer a lot more exposition and link to the second novel. It would have given more background information and stating that Sorna has been deserted for approximately 24 months (2 years approximately) instead of 4 years as suggested in the film. It also re-uses some of the lines from the novel about how the animals were produced to tie in closer to the science in the second novel

According to the script this scene was supposed to take place after Dr. Malcolm and John Hammond talk at Hammond’s house. The scene adds more depth to the characters of Roland Tembo and Ajay Sidhu. As hunters Roland and Ajay have hunted everything together and retired due to lack of sport involved and the ever increasing endangered species acts. Roland admits he is bored with life after picking a fight with a bar patron over harassing a bar maid. Roland eventually comes to the realization that he should take the offer of going to Isla Sorna to hunt a male Tyrannosaur as it was the greatest predator that ever lived.

Gatherers Organize
In the film the audience is left to assume the Gatherer Team (Nick, Eddie, Ian, and stowaway Kelly) just dropped their trailers and took off to find Sarah. This couldn’t be further from the truth as the scene not only shows they came prepared, but also offered insight into the technology they were using to track Sarah and help the expedition. The team looks through their gadgets, and Eddie briefly explains how everything works to track down Sarah and avoid animal attacks.

The way the camp is set up has raised some doubt on the way the movie moments are positioned on the newer Isla Sorna map produced by JPL staff. A possible reason for this is that the team could have found a clear path to park the cars and the RV and swung around instead of approaching through the heavily forested areas and risk damaging their vehicles.

Stegosaurus Escape Run & Extended Ian and Sarah
The run from the Stegosaurus after it left the area was originally supposed to be shown followed by a longer trek back to the Gatherer Base Camp. The scene to the right has Sarah going “Isn’t it great?!” the following trek back was supposed to show more of Ian and Sarah’s relationship. Overall the scene states what happened to him in between films and more or less how they met and offering a healthy amount of exposition and depth to their characters that wound up ultimately cut from the final film.

Roland and Ajay Search for the Rex Nest

A screencap from a scene involving Roland and Ajay searching for the T. rex nest can be found on the JurassicWorld.com intel site, on the Ajay page, but is accessible only when searched for via Google Images. Next to nothing regarding this scene is known, however it appears in neither versions of the scripts known to date.

Ludlow Injures the Baby Tyrannosaurus, Sealing his Ultimate Fate
This was a scene that screenwriter David Koepp was quoted saying he was “sad to see it go” and wished had remained. The reason being was that this scene gave more depth to the characters of Roland Tembo and Peter Ludlow and their motivations for coming on the expedition. Both men would basically exchange bits of their own varied lives and philosophies with each other. Also in the scene was Ludlow stating the fact of wanting the infant ultimately for Jurassic Park: San Diego saying it was something to genuinely build a theme park around. During this scene we realize that Ludlow is intoxicated as well. Unfortunately while being intoxicated and talking to Roland he hears another animal scamper in the underbrush and trips and falls on the infant Tyrannosaur’s leg breaking it causing Roland to curse him out for his blunder. Breaking into the Camp
In a scene previous to this Malcolm, Sarah, and Nick are debating breaking into the camp. After hearing Malcolm lecture about Gambler’s Ruin and how the original goal of the Gatherer Team taking documented evidence of the animals without them being captured is now moot leads to the decision with Nick and Sarah to break into the camp and free the dinosaurs. They hide behind the equipment to avoid detection while cutting the fuel lines to the individual vehicles to prevent the hunters from recapturing the freed dinosaurs.

There is an extended scene discussing the adult T. rex’s behavior over their baby. Unfortunately this dialogue was cut due to pacing and no images are known to exist of the extension on this scene at this time. Also it was during this scene there was supposed to be a confrontation with the Tyrannosaurus family and the High Hide where Kelly was hiding. 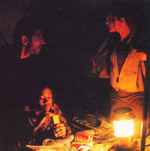 This scene was in some ways critical to the film and overall progression development of Ian, Sarah, and Kelly as a family. Kelly discusses with Ian whether or not he should marry Sarah because of how he feels about her, of course, the topic changes once Sarah enters the tent, but it was excellent for character development and highlighted a bit of romance in the Jurassic Park series.

Benjamin’s Room
In the 1996 draft of the script the Tyrannosaurus does slam its head through Benjamin’s window to smell him, his father, and his mother. This scene was cut possibly due to the fact it was too scary for younger audiences. All that remains of this scene is a behind the scenes photo from the filming.

Extended Tyrannosaurus Escape
There was meant to be several more shots of the male Tyrannosaurus rex escaping from the S.S. Venture and into the InGen Waterfront Complex. One shot would have been of him walking underneath a dock crane and around a corner as Peter Ludlow watches in abject horror. Another shot would have involved the Tyrannosaurus, after breaking through a sign reading “No Fruits,Vegetables, or Animals beyond this point” turning the corner, before returning to the footage seen in the movie: of the Tyrannosaurus walking behind a building and onto a hilltop where he bellows a tremendous roar at the city.

Extended Velociraptor Attack and Pteranodon Sky Terror
There were at least a couple different endings in the second film to choose from that lead the movie to being very similar to the first film in overall format. In the original ending that was changed at the last minute we would have seen a climatic battle similar to what transpired in the first movie only between Velociraptors and the Pteranodons that were nested in the town. It would have also possibly included hang gliders as well as an extensive set construction done of 13 buildings for the town instead of the five. In the end we were left with the San Diego incident. One modification to that is instead of Ian and Sarah overseeing the male T. rex‘s move back to Isla Sorna they watched from their apartment with Kelly.