Beginnings
“I had the idea to do a ride even before we shot the movie,” producer Spielberg explained. “Universal trusted us and they said ‘Okay.’ And 18 months before the film was in release, the ride was already on the drawing board.” Universal gave Spielberg approximately $110 million to have the JP: Ride for Hollywood built. 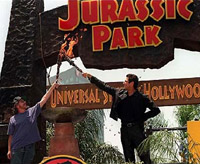 It all began in the summer of 1996, when Jurassic Park: The Ride was officially opened to the public. Jeff Goldblum and Steven Spielberg hosted the opening ceremony on June 15th, 1996.

The first boat that was officially launched was loaded with actors from Jurassic Park; Jeff Goldblum, Ariana Richards and Laura Dern, just to name three of them, plus the creator himself; Steven Spielberg. 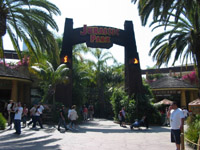 The entire premise of the ride in LA is that John Hammond cut a deal with Universal Studios and built a Jurassic Park right in the heart of Studio City. As you descend down a huge escalator from the higher section to the lower section of Universal, the JP gates can be clearly seen. You go through the gates and enter Jurassic Park proper, which includes various props from the films, such as a full-size Spinosaurus model and one of Eddie Car’s SUV’s from TLW.

In Hollywood, the only ride is the Jurassic Park River Adventure, but what a ride it is! You usually have to stand on line for up to an hour, unless you buy the expensive VIP day passes. It’s well worth the wait, however. In the line cue, there are various TV monitors set in the ceiling, with a video presentation by Sir Richard Attenborough himself as John Hammond. The Universal Employees wear “JP Ranger Uniforms,” and hand out plastic ponchos.

When it’s your turn to board the ride, a yellow raft that holds 25 people comes up an artificial river to the boarding area. Across the water can be seen a “Jurassic Park Animal Control” room, where various Park Rangers dutifully monitor the ride. You climb into the raft and a handlebar comes down and locks you into the attraction; it seems as if Hammond finally listened to Muldoon about implementing locking mechanisms. The raft takes off down the man-made river, and the adventure begins. 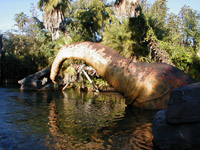 The raft slowly travels downstream as Richard Kiley narrates. You abruptly turn the corner as the narration comes to a climax, and pass through a massive pair of JP gates as the famous theme blares from the speakers. You immediately enter a lagoon, where you are greeted by several Brachiosaurs (here called Ultrasaurs). The peaceful plant-eaters look at you curiously while a few spray water from their massive blowholes at the passing guests. 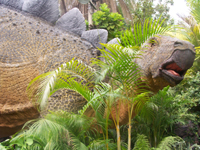 You leave the sauropods behind and enter a cave full of Stegosaurs, who lazily watch the raft pass by. Some of them poke their heads very close to the visitor vehicle. You continue on your way as the narration continues… but suddenly a Parasarolophus erupts from under the water and knocks into the raft, knocking it off course. Alarms go off as the raft heads for destinations unknown. 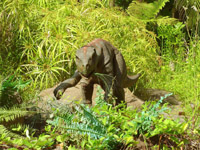 The narration stops as the raft approaches a large structure, which turns out to be the raptor pen. The electric wires are destroyed, suggesting that the vicious pack-hunters have escaped. As you continue on you see a pair of compies on the shore, fighting over a popcorn box. A Psittacosaurus can be seen watching the raft from the shore. The mood is decidedly dark as you pass another JP visitor raft… but no visitors can be seen; only a Dilophosaurus, which spits water (fortunately not its toxic saliva) at the passing people!

The raft goes further off course. You see a large wall with a Jungle Explorer jeep from the first film hanging precariously over the side! A T. rex roar can be heard as the car goes slamming down the wall and into the river, splashing the guests. A voice comes over the raft’s speakers, saying that Animal Control is going to try and reroute your raft through a maintenance building to get the visitors safely out of the park. The raft enters the dark building, as over the speakers the desperate voices of Park Rangers can be heard, trying to control a number of escaping dinosaurs. 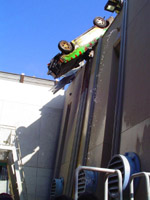 The raft goes further and further up, into the highest part of the building. On the way up, raptors leap out at the raft from behind walls, their jaws snapping at the guests! As the raft climbs up the track, a voice over the loudspeaker announces that dinosaurs in the maintenance building have caused damage, and lethal chemicals are about to spill into the air! A countdown begins, ticking off the seconds until the gasses spill into the air and kill everyone. Just as the countdown reaches one, the raft reaches a waterfall… and a full-size T. rex attacks, emerging from the waterfall and roaring defiantly at the terrified guests. Then, the floor gives out, and the raft plummets down in an almost vertical 85-foot drop!

The ride calms down as the raft escapes the rampaging dinosaurs. The narration kicks in again, stating that “we hope you have enjoyed your tranquil journey through the world of the dinosaurs.” The raft comes back to the boarding center, and the guests get out on the opposite side of the river that they boarded on.

True to Universal Studios, the ride exits into a Jurassic Park Gift Shop. Here you can purchase various dino-related items, including a picture of your raft in mid-drop, with a close-up of the terrified faces of you and everyone else on the ride! There is also a “Jurassic Café,” which has food named after dinosaurs, and a mural similar to the one seen in the Visitors Center in the first film. All the while, John William’s soundtracks play over loudspeakers. When you leave the café, you exit Jurassic Park back into Universal Studios.

Overall, Jurassic Park Hollywood is a great place to visit for every JP fan, dinosaur nut, or anyone who enjoys a great amusement park ride. When it was built in 1995, the 85 foot drop was the steepest in the theme park world, and whenever Steven Spielberg rode the ride, they had to stop the raft at the top of the drop for him to get off; he’s actually afraid of heights! So, I highly recommend the JP attraction at Universal Studios Hollywood to everyone… just be prepared to get more than a little wet! (Summary by Robotpo) 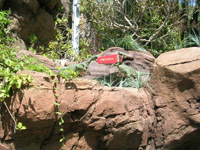 While Islands of Adventure, Orlando features a whole Jurassic Park Island, all the Hollywood park has to offer is “Jurassic Park: The Ride” (“Jurassic Park: River Adventure” in Orlando). It is essentially the same ride, only small changes were made when they built a new version of the attraction in Orlando. Some of these differences include replacing the falling tour car with a raptor trapped in a box, some of the positioning of the dinosaurs, and compies fighting over the shirt of a worker instead of a popcorn box. Both rides share the same problems – even though the constructors changed some scenes, they did not get rid of the problems caused by the constant involvement of water.” 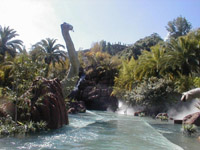 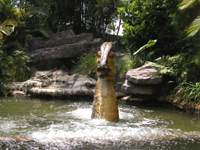