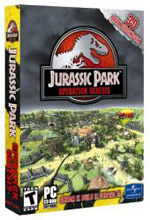 Synopsis:
Jurassic Park: Operation Genesis (known colloquially as ‘JP:OG’ or ‘JPOG’) is a video game for the PC, Xbox, and PlayStation 2 based on the novel and film series Jurassic Park. The main point of the game is to recreate Jurassic Park – building a 5 star theme park with dinosaurs, and turning John Hammond’s dream into reality. In the park, the player builds paths, amenities for visitors such as, food and toilets, as well as enclosures and attractions. One must also keep the park safe and secure. For example, during a raptor breakout detected by a security camera, one raptor could run towards the visitors and be quickly taken down by a sentry turret (an automatic heavy machine gun), while the rest could be sedated by the ranger helicopter and moved back into their enclosures. The park can be populated with up to sixty dinosaurs representing twenty-five different species. The player can also add attractions similar to those seen in the film, such as the safari seen in the Jurassic Park film, and additional attractions like a balloon tour and several varieties of viewing platform.

Back of Box Description:
“Now is your chance to fulfill Dr. John Hammond’s dream by successfully designing and managing the ultimate dinosaur theme park. Jurassic Park: Operation Genesis allows gamers to create the most amazing theme park the world has ever seen. As the first ever fully 3D action-sim, Operation Genesis gives players two games in one. Either build the ultimate dinosaur theme park or engage in 10 action-packed missions that will truly test your gaming skills. Dream it. Build it. Survive it. This truly is Jurassic Park. Your way.”

Where’s The Money?:
Press [ + ], Down during game play. Your finances will be reduced to zero.

Market Day:
Press [ + ] + Down during game play. The market will now be instantly restocked with fossils.

Open To The Public:
Press Left, Down, Right, Up, [ + ], [ + ] during game play. You can now select your three digsites without the required stars.

Seal Of Approval:
Press Right, [, Up, [, [, Down during game play. Your park rating will increase by one star.

Three Stars:
Press [, ], Down, Down, [, Right during game play. Your park will have a three star rating.

Guaranteed Immunity:
Hold [ + ] and repeatedly tap Up during game play. Dinosaurs will no longer get sick.

Alternately, enable the “All Research” code, or research the following: all vaccines, glowing egg.

Plague Outbreak:
Press Down, Up, Down, Left, ], ], ] during game play. Your dinosaurs will become diseased.

Crash!:
Hold [ + ] and repeatedly tap Up, Down, Up, Down during game play. One of your safari cars will blow up.

Sequencing Error:
Press Down, ] + Up during game play. This will set all excavated dinosaur DNA to 55%.

All Research:
Press Down(3), Left, Right, [, Down, Up during game play. Everything will be researched.

Driveby:
Press ] + [, Left, Down, Right, Right during game play. You can now shoot from the safari cars by using the camera.

Isla Muerta:
Press ], ], ], [, Right during game play. Dinosaurs will now appear to be the living dead.

Dial-A-Twister:
Press Left, Up, Right, Down, [ + ] during game play. A twister will appear on the island.

Extinction Event:
Press [, ], Down, ], [ during game play. All dinosaurs will be killed.

No Red Tape:
Press [, ], Left, Down, Down, Down, Down during game play. If anyone dies, you will not get charged no matter if you are in emergency mode or not.

Happiness Is…:
Press ], Down, [, Up, Up, Up during game play. Your visitors will be happy.

Instant Alcatraz:
Press Down, Down, Left, Right, [, [, Up, Up during game play. Your fences will have low security.

Ooops!:
Press Up, ], Down, [, Left, Left during game play. All fences will be destroyed.

Rocky Road:
Press Right, Right, ], ], [, Down during game play. All paths will be damaged. Note: Make sure there are no visitors on a path when this code is enabled.

“With JURASSIC PARK, gamers create the most amazing dinosaur theme park the world has ever seen, or battle your way through ten intense missions that will truly test your skills against the awesome powers of nature and its most dominant creatures.” 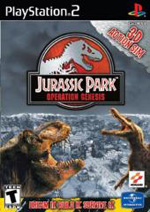 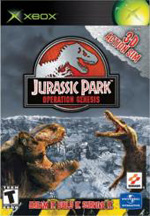 Left, Down, Right, Up. Tap L1 and R1 simultaneously, twice = Open to the Public

Left, Up, Right, Down. Simultaneously tap L1 and R1 = Dial-A-Twister

Jurassic Park: Operation Genesis Unlock Site B
To unlock Site B, beat all of the missions in the game. Site B will be available from the main menu.

Jurassic Park: Operation Genesis Easy Money
To get $10,000 instantly, press DOWN, UP + L, and you’ll be in the money.
Alternate method: Press L + UP then L + DOWN.

Jurassic Park: Operation Genesis Unlock All Research
While playing, press DOWN, DOWN, DOWN, LEFT, RIGHT, L, DOWN, UP.

Jurassic Park: Operation Genesis Incite Car Crash
While playing, press L + R then tap UP then DOWN repeatedly to destroy a random vehicle.

Jurassic Park: Operation Genesis Vaccinate Dinos
Dinos won’t get sick if you press UP, UP, R, L, UP, UP.

From this screen, you can access a range of Jurassic Park games:

Welcome to Jurassic Park (The GUI)

Your view of the park contains a lot of useful at-a-glance information. It also the gateway to accessing the staff and systems available to use.

Objectives
When you start running Jurassic Park, you are working for INGEN. Use INGEN’s vision statement for Jurassic Park to establish your objectives. As the manager of Jurassic Park your aim is “To create the most successful theme park in the history of the world” – John Hammond

Your objectives are therefore as a manager to…

Aim to increase your Star Rating! – The ultimate aim of Operation Genesis is to create a 5-star park. The more stars you earn, the more popular the park will be. You earn stars by entertaining your visitors.

Protect your visitors! – Take every precautions to prevent visitor fatalities. Build Ranger Stations and other facilities to protect the lives of your visitors.

Make money! – INGEN’s investors will lose confidence if the park budget goes into the red. Always keep a positive balance in your budget.

Operation Genesis / Site B
Operation Genesis is the park simulation game. Site B is like OG but with a difference. No visitors. That means that while in OG your aim is to build a park and entertain visitors. Site B is just about creating a island and setting free dinosaurs… looking after them and watching them live their lives. Think of it like a virtual “fishtank”. OG is the full works. This is where all the action and management happens.

In Operation Genesis you can…

In Site B you can…

Island Generation
Your first step in Operation Genesis and Site B is to choose the island site for your park. You can create any island enviroment you like by altering the slider bars. Each one of the following variables will have an impact on the park that is built:

Once you select the terrain settings you want, you can alter the appearance of your island by clicking on Next Island. If you’re happy with your selection, click on START to begin Operation Genesis/Site B.

IMPORTANT: Check the weather forecast regularly. Jurassic Park is located in the North Pacific, where there are frequent storms during the wet season.