A scene that many fans feel should have been kept was a longer goodbye between Alan and Ellie. True their relationship was mostly cut out of the first Jurassic Park film, but it is still somewhat implied they were an item. There was also another scene in the dining room where Jack the Parrot responds with “Bullshit!” when Ellie and Alan are discussing the Velociraptor pack communication theory which Ellie affirms Alan taught him that.

This scene was in the movie trailers for JP3. It was the plane taking off at sunset possibly from Montana to go to California (or elsewhere) for the Kirby’s staging to proceed to go to Isla Sorna.

These scenes were mostly consisting of the animatronic Spinosaurus and animatronic Tyrannosaurus sizing each other up to fight. The scene mostly consisted of both the Tyrannosaurus and Spinosaurus roaring and growling at each other to mostly size each other like most territorial animals do. Unlike most territorial animals the Spinosaurus would finally slap across the T.rex‘s face with its forearm. This scene itself was seen in the trailer, but the evidence of the sizing each other up comes from several behind the scenes photos as well as promotional stills released for the film showcasing the fight.

“You should come look at this!”

Another scene from the trailer and it’s generally considered to be an alternate take of Paul yelling for Grant. It’s not really a cutscene, but there are two perspectives for this scene now. The one from the picture here and the one we get in the film.

As Dr. Grant, the Kirby’s, Billy Brennan, and Udesky go into the Embryonics Administration these scenes were supposed to extend it likely to offer more exposition about InGen and their failures at Jurassic Park and again in 1997. Also the scene would be longer showing a bit more depth and how large the structure was and a possible recap about how the animals were cloned. It’s unfortunate these scenes got cut as they would’ve touched on the approach of Isla Sorna being a research facility instead of a theme attraction like Isla Nublar was meant to be. 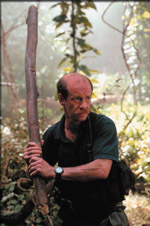 Udesky – The Hero, and the Tragedy

Udesky gets brave and uses a stick to hit the Velociraptors that are attacking him in this scene. However, the Velociraptors eventually take the stick from Udesky, and then injure him altogether. It would be nice to have been included as it would have given Udesky a nice send off before he met his demise. Unfortunately it ended up on the cutting room floor sadly.

An unfinished scene that appeared as a bonus feature on the JP3 disc was during the scene between Grant and Eric on the boat and would have expanded one of the few peaceful scenes in the film. These Ankylosaurus were going to be crossing the river in front of the InGen Barge.

Another incomplete effects scene was on the bonus features of the home video release of JP3 was the Spinosaurus‘ Emergence from the river. It does take away a bit of surprise away from the way the Spinosaurus emerges in the final film though however.

A scene that was cut previously to the Spinosaurus emergence scene though included Paul Kirby’s line of him “feeling a little bit offended” when the Ceratosaurus surprised the trio and sniffed them after everybody in the group dug through piles of Spinosaurus droppings searching for the satellite phone. The offence was coming from the fact the Ceratosaurus decided they weren’t worthy of being a snack of course. The line may have been considered too hokey to be included.

Exchanged for something to a bit more subtle and overall hinted, this would have shown Paul and Amanda sharing a kiss at the sight of their rescue from Isla Sorna as Eric’s incident brought them together again. There was also supposed to be a conflict between the Pteranodons that escaped from the Aviary and the Velociraptors that pursued Grant and the Kirby family across the island for their missing eggs.

According to an early script during this time of the film the speed boat incident’s cause in the beginning would be elaborated on and was revealed to be the fault of the Pteranodons that were kept in their aviary cage. The scene was dropped because it would have made a plot hole how the Pteranodons were able to get out of their locked cage before Amanda left the door open to let them out accidentally. Sadly there was also a scene with Grant thanking Ellie for sending the rescue at the end of the scene, but this was also cut from the final film.