The T-Rex Rotunda Rescue has puzzled many fans of the series mostly due to the fact the ending was changed at the last minute from John Hammond rescuing Grant, Ellie, and his grandchildren to being the T-Rex doing the rescuing. Some believe there was a cutscene showing us the Tyrannosaurus breaking through a “wall”, which was actually the same sheet of plastic the Velociraptor went through.

Here we can clearly see the front facade of the Visitor Center still under construction. Entering the Visitor Center, we are greeted by a very bright rotunda. The camera angles are quite restricted and very little of the entrance of the rotunda is shown, but as we skip ahead to later in the film and we see Grant and the kids entering the Visitor Center from an inside perspective. It is from this angle we can see that down one of the front halls is a wall with two double red doors. Also notice the placement of the wall-at the edge of the 3rd double window.

Later we then are presented a shot of the other hall and we find that draped across it is a white tarp that is lit up quite prolifically. The tarp actually does lead back outside and that’s how the Raptor escaping from the shed entered without disturbing much, but this tarp is also the same entrance where the T-Rex herself enters, presumably having followed behind the Raptor. There was no “breaking through the wall” in fact, the entire sequence being changed from Hammond being the rescuer to the Rex was entirely a surprised. This is merely a mis-remembrance by a lot of fans that insist they saw it and are most likely confusing the Raptor’s earlier entrance in it. Mostly, the scene is shot to the point with the Rex make a triumphant surprise rescue in the end and the build up was entirely focused on the action with the escaped Raptor pack.

Let’s understand the structure of the Visitors’ Center as it is important to figure out how this scene specifically works and how people can easily get confused by the lead up to the Rex’s rescue. The Visitors’ Center, according to its construction, is made like any house: wooden supports with walls (as seen here). 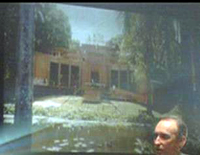 Now, looking back at the outside, we can see the depth of and width of these walls. Now as can be seen in the film, on the right side of the compound, there is a wall with two red doors. On the left side, however, there is simply a tarp. This is because that wall was not yet completed and the tarp itself shields the inside from any elements. Presumably this could be reason to believe that the tarp would ultimately lead to being a wall of glass to view outside given the description of the Visitors’ Center in the original novel. The tarp is there to protect the inside from the elements and it is through that tarp (in the image on the left under the scaffolding) that the Raptor and later the Rex made their entrances.

Next we see the actual shot of the Rex having entered the visitor center. You can see clearly that metal bars are bent out of shape. Notice that would have been in the same shape structurally as what the wall on the other-side showed: several panels and a placement for double doors. They have been warped and bent out of shape by the Rex entering. Two potted plants are positioned there and notice that there is no wall past the edge of the thatched roof except for the very base of it. The rest of it is gone. 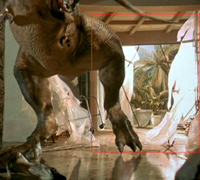 Many people are confused by this because it seemingly contradicts what is seen on the outside-a wall. But after much consideration, it becomes
clearer that the way the scene worked was this: The front, side, and top walls/roof are all built, but to aid in construction, two walls were left out until the inside of the rotunda was finished: the wall in the alcove and the wall on the inside, both of which would have double doors or a glass pane possibly. Because of this, tarps were put in place of the walls to keep out the elements while not restricting construction worker access. This would also the allowance of moving exhibits for the Visitor’s Center in and out of the building. Case-in-point would be the construction of the display between the Alamosaurus and Tyrannosaurus that would serve as a crucial obstacle in the film’s finale. Later, after the power is out, this proves a weakness, exploited by the crafty Velociraptors. One finds this missing wall, and enters the Visitor Center through it after being beckoned by the others earlier. Following the scent of the Raptor, the Rex came to the Visitor Center. Seeing the ability to fit into the Visitor Center, the Rex simply knocks out the remaining portions of the facade totally and tears down the tarp, and catches the Raptor off guard totally, and providing an opportunity for “saving the day” for Grant and company as a distraction.

Unfortunately, many people still swear they saw the Rex charge through the wall and smash despite the fact that musically, when looking at the queues for the songs, it doesn’t fit, in fact there is no evidence of it in the score studies whatsoever between the original intended composition to the change with the Rex making her final appearance in the film. Cinematically as well, the only thing similar to this is the Raptor coming from the shed where Ellie had turned on the power earlier poking her own head under the plastic sheet to surprise our heroes. As said, the original ending had Hammond saving the day instead of the Rex and while there are the restricted camera angles like at the Rex Paddock‘s sequence it does make it seem like the Rex burst through a wall. Often when we are younger we create memories and subsequently have false memories stemming from our favorite films to basically rationalize and make sense of a scene we didn’t particularly understand.  At first, the scene seems quite impossible that the Rex could have snuck up the way it did, but the fact is that our heroes are focused on the two Raptors in the rotunda as well as the audience. That’s how the Rex makes her surprise appearance, tearing through the tarp and delivering a heroic rescue to save the day.