This scene was supposed to emphasize a romantic relationship between Dr. Grant and Dr. Sattler, as well as introduce a few bits and pieces of healthy science talk about the “Velociraptor” skeletons. This would have mostly about how they died and how they hunted in packs. Overall these scenes were to establish a little background information about the characters and foreshadow the Velociraptor intelligence seen later in the film.

While arriving to the island a momentary scene that was seen in the trailer was cut where Dr. Sattler grabs the extinct plant leaf she talks about as the group approaches their first encounter with a dinosaur. This scene is actually show in the trailers for the film, but was obviously dropped from the final film itself.

Reason for the Hammond’s grand kids being present

This scene involves Hammond explaining to Gennaro, Grant, Sattler, and Malcolm on why exactly Lex and Tim are here at Jurassic Park. Hammond tells them that their family is going through a difficult time as their parents are getting a divorce. Hammond is wanting his guests to be understanding of this fact, but apparently Dr. Malcolm makes a cynical comment and discusses how the group’s visit is an inspection after all and not a weekend excursion as Gennaro said to Hammond as they drove to the Visitors Center upon landing.

What was making the Triceratops sick exactly?

One of the most unfortunate casualties of the scenes cut from the final film was the resolution to the sickness that the Triceratops was suffering from. The scene basically wraps up why as Tim finds rounded stones beside the West Indian Lilac that is toxic to the animals. After examining the dinosaur’s feces it is then suggested then by Ellie and Dr. Grant that when the Triceratops eats the gizzard stones it accidentally eats the poisonous West Indian Lilac beside the stones. Further it would be explained that the animal would also be throwing up the lilac and so that is why the digested plant matter would not be present in the Triceratops droppings.

Another cut made to this scene involved the baby Triceratops scene that was supposed to take place around this time and went so as far as producing the infant Triceratops animatronic. The baby was to goose Lex and then demonstrate itself as being playful. This scene was also cut at the last minute after Stan Winston Studios produced the model for use. The model would luckily though be re-used in The Lost World: Jurassic Park when Nick and Sarah free the dinosaurs from the Hunters.

Island Trek
A couple of pictures have appeared showing what would be a longer journey for Grant and the kids trekking across Isla Nublar to return to the Visitor’s Center. This scene is supposed to be before Grant and the kids scale the Perimeter fence.

Journey to the Shed 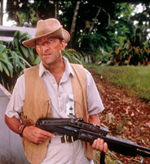 This shot would in fact be a directional shot to show where Muldoon and Ellie were heading after exiting the emergency bunker where Hammond and an injured Dr. Malcolm both remained in as the two went to find out what was taking Ray Arnold so long to restore the power.

Raptor in the Shed

This scene appears to be an extension to the scene with Ellie and Grant finding each other. Ellie is supposed to be calling out to Grant and telling him to run towards the Bunker while simultaneously asking where the kids were and if they were safe. We don’t exactly know if this would explain what happened to Ellie’s pink over shirt though.