As poetic a finale as there can be, and an assuredly common trope that ultimately works as an ending in any film made since the beginning of ever is the atypical “ride off into the sunset” type of ending. That said, the scene is a bit of headache because you have to think geographically to sort of orient yourself and orient our heroes in the film. Unfortunately the Jurassic Park series is pretty notorious for throwing out their own island’s geography for the sake of a picturesque shot. In fact there’s been times that locations have changed because the creators consider it better flow for the story. This was actually the case of the Mosasaurus Lagoon in Jurassic World being in land and in Jurassic World: Fallen Kingdom its moved to be closer to the shore of Isla Nublar! 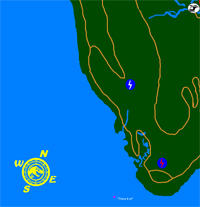 First off, we must understand exactly where the helipad is.As you can see, the Helipad is in the middle to southern area of the island (the Helipad icon is highlighted with white). Now, taking a flight route from there, the helicopter seemingly flew out to the coast as looking through the windows behind Grant, the mountains of the island are still visible, but looking from his point of view, the ocean and pelicans are visible. So, following the coast, the helicopter then flies off into the sunset, seemingly inconspicuous. The problem lies with the fact that Isla Nublar is West of Costa Rica and that if they wanted to go to the mainland, flying West-off into the sunset-they would be flying the wrong way considering the mainland is in the east! Whoops! 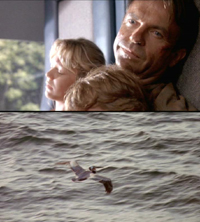 Thinking back to the night before, one must remember that Isla Nublar was just hit with a tropical storm. Muldoon says in the film “The National Weather Service is tracking a tropical storm about 75 miles west of us.” The storm came in from the southwest and continued moving northeast, so theoretically it would be hitting the mainland within 24 hours after that fact unless it slowed down or what have you. Watching the computer screens latter, we see that the storm is a little bit south of the island, but is heading for the island still. Unlike the unnamed storm that almost hit Nublar before, this one did not turn south and continued right across Nublar. This one is roughly heading north to northeast.

The survivors of the Nublar Incident in fact very well could have had an early start to the day and the time to walk to Visitor’s Center was less than a day’s walk according to Dr. Grant. Sunrise is typically in the early morning between 6 and 7 AM. Being the children and Grant would cover a lot of ground the night before from the Tyrannosaur attack, with having to sleep in the Brachiosaurus Paddock. The point in which Dr. Grant and the kids stopped would approximately be less than halfway the length to the Visitor’s Center.

The other matter is that the path the Helicopter takes on the exit when it leaves the island. Due to the passage of time could have been against an early noon sun (approximately 11:30/12:00) to the east. We also assume the helicopter is exiting the same way it entered when Hammond brought Grant, Sattler, Malcolm, and Gennaro to the island 24 hours before. If anything it’s possible the last shot ends with the Helicopter turning and moving towards the east to northeast to head back to the mainland. Given the amount of time the survivors had to accomplish things from sunrise to late-midday we think this is the most likely passing of time. All in all, it seems at first to be a big flub, but in reality it wasn’t at all. It just seems that way. We need to make sense that the chopper most likely turned to the east when it exited the island and due to the camera perspective we didn’t realize the helicopter had swung around to ride into the sunrise. This adds a different connotation to the ending to signify that a “new day had dawned” at least as far as the ramifications for the world at large with dinosaurs being revived from extinction. The metaphorical sunset would imply that the situation is over altogether and we need not be concerned about this happening again. Looking at this logically and analytically does force a new perspective on the situation altogether.